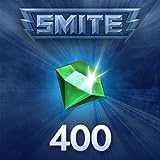 Amazon.com Price: $7.99 (as of 2021-01-16 21:26:01 GMT) Product prices and availability are accurate as of the date/time indicated and are subject to change. Any price and availability information displayed on Amazon.com at the time of purchase will apply to the purchase of this product.

Come with us and leave your mortal world behind! This is the SMITE, the online battleground of the Gods.

BATTLEGROUND OF THE GODS

Come with us, and leave your mortal world behind. This is SMITE, an online battleground where the Gods of Old wage war in the name of conquest, glory and, most of all, FUN. Whether this is your first Multiplayer Online Battle Arena (MOBA) game or you’re a seasoned veteran, the intense action and irreverent mythology of SMITE will make you a believer.

UNIQUE PERSPECTIVE
Unlike other MOBAs, SMITE brings you directly into the action by giving you the same point-of-view as your God. From blind-side ambushes to aimed shots, a new universe of strategic possibilities awaits.

DOZENS OF GODS
Thor, Kali, Ra, Zeus, Sun Wukong and many, many more–choose from over 60 playable Gods and blast your foes with legendary weapons, earth-shattering powers, and unique strategies.

ESPORTS: COMPETE AND DOMINATE
With leagues and ladders for every level of play, SMITE’s burgeoning eSports community has room for everyone, whether you’re brand new to the game, or competing in front of a crowd of thousands at the annual Smite World Championship.

Cut through your enemies, encase them in ice, or drown them in a vortex of souls. Assume direct control of your godlike avatar and experience the MOBA genre up close with the game camera directly behind your character.

Choose from a long list of well-known and more obscure gods, each with their own history, special abilities and unique play style.

Master and use your godlike abilities to fulfill key roles such as damage dealer, tanking, crowd control, and support. Explore the map and defeat NPC enemies for increased gold and buffs that help both you and your allies. Then deny your opponents victory with perfectly-timed stuns and calculated ambushes.

Two teams of 5 players fight to slay the opposition’s Minotaur on an inferno-themed battlefield. But first they must contend with three flaming Phoenixes plus Cyclops NPC camps and the legendary Fire Giant in the jungle.

Within a single match, your god levels from 1 to 20, causing your abilities to gain strength. You can purchase in-game items and consumables to benefit your god and complement your personal play style – whether it’s buffing your Magical power, Physical power, Defense or Utility capabilities.

Every attack in SMITE is a skill shot that you control. Ranged attacks are carefully aimed, melee attacks properly positioned, and Area of Effect damage must be ground-targeted. Predict your enemies’ movements and hit your mark for maximum effect in fast-paced combat.

Everything affecting gameplay in SMITE can be earned simply by playing the game. Players have access to an initial set of playable gods for free, while additional gods are unlocked through gameplay time or more quickly through micro-transactions. Cosmetic skins can be purchased for further customization.