Amazon.com Price: (as of 2021-01-16 15:18:15 GMT) Product prices and availability are accurate as of the date/time indicated and are subject to change. Any price and availability information displayed on Amazon.com at the time of purchase will apply to the purchase of this product.

Guild Wars 2 is a subscription free,* Massively Multiplayer Online Role-playing Game (MMORPG) exclusively for the PC gaming platform. A sequel to the original Guild Wars game released in 2005, the game is set in a persistent gameworld and features a choice based storyline focused around the continued struggles of the peoples of the land of Tyria. Now hundreds of years past the events of the original game, the almost forgotten threat of the Elder Dragons has risen, but so has ‘Destiny’s Edge,’ a guild pledged to combat them. Game features include: a dynamic event/questing system, small and large-scale combat, player vs. player arenas, multiple playable races and professions, and expansive and rewarding dungeon crawls.

The digital download edition contains a variety digital bonus items. See the complete list of these below.

In the Shadow of Dragons Legends Become Real

For generations, strife and chaos raged across Tyria as the great races competed and warred against each other. Then the dragons awoke. The all-powerful Elder Dragons rose from beneath earth and sea, wreaking havoc on a global scale. Great cities crumbled before their might. Coastlines flooded. Lush forests burned. Tyria was forever altered. Now, the undead legions of the deathless dragon Zhaitan surge across the land, hungry for the destruction of the free races of Tyria: the Charr, a ferocious race of feline warriors; the Asura, magical inventors of small size and great intellect; the Norn, towering shapeshifters from the frigid north; the Sylvari, a mysterious race of mystical plant folk; and the Humans, an embattled but resilient people. The time has come for the free races to stand together against the rising tide of evil. Magic, cold steel, and the deeds of heroes will determine the fate of Tyria. 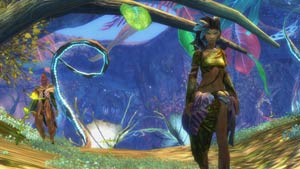 Return to Tyria hundreds of years into the Guild Wars timeline to play as a new race, in a new MMORPG adventure.
View larger 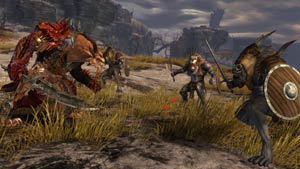 Assume one of a variety of professions in a choice based storyline.
View larger

* You just buy the game and play it online.